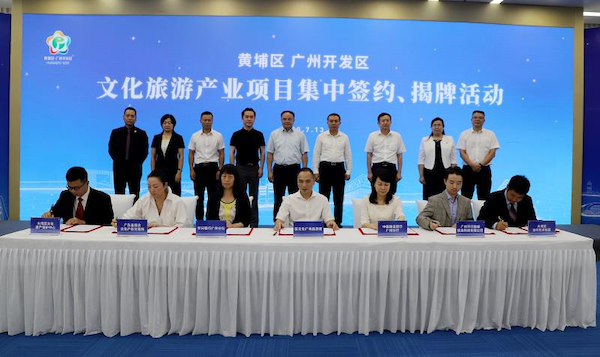 A total of 32 cultural tourism projects were signed to settle in Guangzhou's Huangpu district on July 13, with an overall investment of 2.16 billion yuan ($308.26 million).

The expected revenue of these projects, including three industrial parks that are under construction, will amount to 10.5 billion yuan after reaching design capacity.

Huangpu has seen steady growth in its cultural tourism industry as the added value of the district's culture industry reached 11.48 billion yuan in 2018, ranking in the forefront among all districts in Guangzhou.

One highlight is the project of building a cultural tourism town by renovating the current Nanwan community. The town, which will cover an overall building area of 88,000 square meters, will cost 740 million yuan. It will make full use of the local folk arts to offer a variety of experiences and activities on intangible cultural heritages.

An arts research institute of high-caliber overseas talents, which is being introduced to Huangpu by Huangpu Culture Group, is led by the team of Professor Sun Jie from the College of Design and Innovation of Tongji University.

The institute has gathered arts talents from countries such as Italy, Spain, Denmark, and Sweden, as well as clustered various industrial resources in areas including fashion and innovation, forming a strong team in education, scientific research, and management.

"Huangpu is the best demonstration for the reform and innovation of business environments in China, and we are confident in the development of Huangpu, as well as the future development of companies that are settling in Huangpu," added Sun.