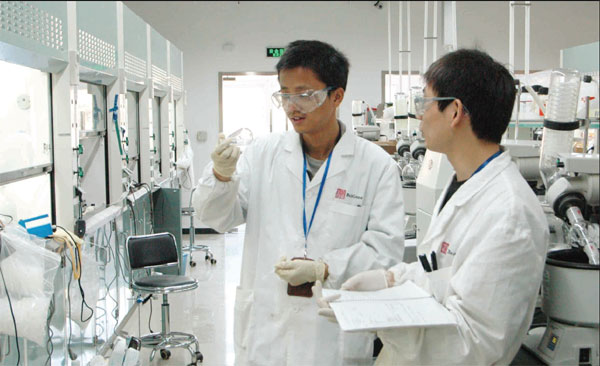 Scientists discuss use of equipment at the central chemistry lab of BeiGene in Beijing in May 2017. [Photo provided to chinadaily.com.cn]

Biotech company BeiGene officially kicked off its fourth plant construction in Huangpu district in Guangzhou on Sunday, playing a role to help build the Sino-Singapore Knowledge City in this southern metropolis to become largest production base of anti-cancer drugs in Asia.

Located in Sino-Singapore Knowledge City in Guangzhou's Huangpu district, construction of BeiGene's fourth plant that occupies an area of more than 33,000 square meters will cost more than 800 million yuan ($124 million).

The fourth plant will mainly research, develop and produce anti-tumor monoclonal antibody and related cancer drugs independently, said Wang Xiaodong，founder of BeiGene and a foreign associate of Chinese Academy of Science, at the commencement ceremony.

Huangpu district, in the eastern part of Guangzhou, signed contracts to construct a total of 31 new projects and kick off construction of another 72 on Sunday.

These projects that mainly involve in the bio-medicine, new energy, new materials, 5G, information, finance, culture, education, tourism industries and infrastructure will cost more than 113.9 billion yuan. Industrial production of about 241.6 billion yuan is predicted in the years ahead.