A total of 61,527 running enthusiasts signed up for the 2020 Guangzhou Huangpu Marathon, which will be held on Dec 27, with the lottery winning rate to participate in it being 26.24 percent.

The event will feature 6,000 full marathon runners, 6,000 half marathon runners, and 8,000 mini marathon runners, as the number of participants is capped at 20,000. Of them, 1,252 elite runners and 500 runners that have made donations for public welfare qualified for the marathon directly, according to organizers at a press conference on Dec 7. 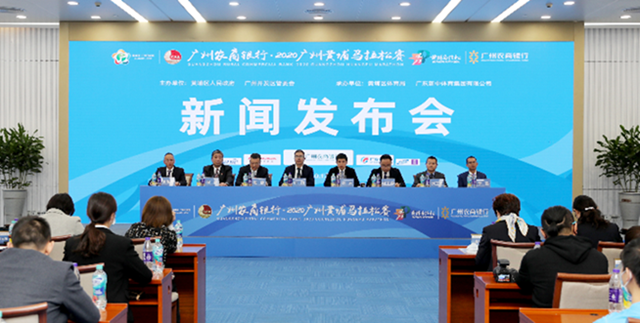 A press conference for the 2020 Guangzhou Huangpu Marathon is held on Dec 7.

The starting line of the event is set at Lyuzhou Square in Guangzhou Science City, while the finish lines for the full marathon, half marathon, and mini marathon are at the Northern Gate of China-Singapore Guangzhou Knowledge City (CSGKC), Lyuzhou Square, and Second Lihong Road respectively.

The medal of the marathon features the map shape of Huangpu, with the local emblem in the center. The front and back are engraved with an electronic chip-like texture, while the three rings on the periphery refer to the tram tracks, signifying that Huangpu runs at high speed on the high-tech road.

The white uniform for the events boasts breathable and quick-drying fabric. Its right shoulder and the hem have blue and yellow stripes that sketch the Southern Gate and Northern Gate of CSGKC.

This year's marathon will adopt high technologies, such as palm recognition, in its COVID-19 epidemic prevention and control measures, article claiming, and registration to offer optimal services, as well as to prevent substitute runners, unqualified running, and other rule breaking.

The event is being hosted by the Huangpu district people's government, with the sponsorship of Guangzhou Rural Commercial Bank.