Old urban areas in Huangpu district of Guangzhou, in South China's Guangdong province, will be renovated and redesigned for the development of the artificial intelligence industry and digital economy.

A total of 10 urban renovation projects were launched in Huangpu last Friday that will cover 305,000 square meters.

The aggregate investments are expected to reach nearly 150 billion yuan ($21.9 billion), according to the district government.

The old urban areas will be turned into industrial parks for digital and software companies as well as supporting facilities for employees and their children's education, according to the development plan.

The local government estimated that these projects could produce at least 22 billion yuan industrial output annually. 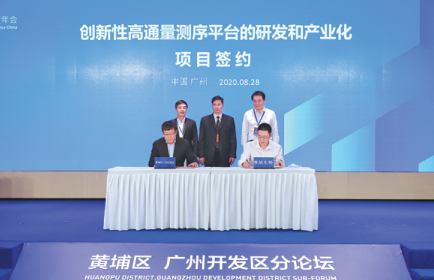 In one project in the Yuzhu section of Huangpu, which targets the digital economy, the space filled with shabby warehouses, old factories and cargo depots has been torn down.

"The real estate could generate less than 30 million yuan a year before," said Yu Tinghui, a community leader of Maogang in Yuzhu.

"When our project is put into operation, about three years later, the collective value of real estate of our community could reach 7.8 billion yuan and the annual revenue might hit 110 million yuan," Yu said.

According to the development plan, the renovated area is to measure about 60,000 sq m, attracting about 350 companies and headquarters in the industries of commerce and trade, digital information and healthcare in the future.

According to the district government, nearly 33 million sq m of old urban areas in 66 communities, which were managed in the name of villages, in Huangpu will be renovated by the end of 2022.

After a facelift, these areas can provide a buffer for industrial development, improve the local residents' lives and be attractive for doing business and living in.