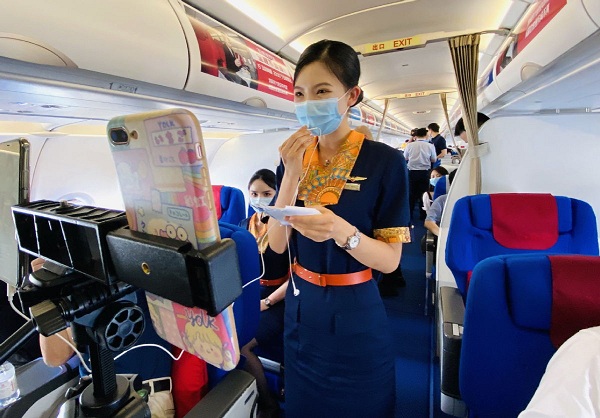 A flight attendant conducts a livestream session during a flight from Qingdao, Shandong province, to Chengdu, Sichuan province, on Tuesday. [Photo by Li Jia/For China Daily]

China has started operating its first passenger jet that offers high-speed internet service on board, according to China Aerospace Science and Technology Corp, a State-owned space conglomerate.

The aircraft is a modified Airbus A320 and is used by Qingdao Airlines' QW9771 flight from Qingdao, Shandong province to Chengdu, Sichuan province.

Connected with the space giant's communications satellite ChinaSat 16, also known as Shijian 13, the jet conducted the first high-speed-internet flight on Tuesday afternoon, transporting government officials, contractors and representatives from enterprises involved in the program on a three-hour trip to Chengdu, the company said in a statement.

Passengers on the flight were given access to internet service at a speed of about 100 megabits per second, several times faster than other internet-available flights in China and as speedy as fixed-line service.

They were allowed to use their own mobile phones to connect to the internet, and some of them were invited to take part in the first onboard livestreaming broadcast in China, the statement noted.

According to a statement published by Qingdao Airlines, modifications on the aircraft began in November, and the first test flight was made in January. The plane's certifications and tests were conducted from December to June, it said.

ChinaSat 16, the first communications satellite in China using Ka-band broadband technology, was developed by the China Academy of Space Technology based on its DFH-3B communications satellite platform. It has been orbiting the Earth nearly 40,000 kilometers above the ground since it was launched into space atop a Long March 3B carrier rocket from the Xichang Satellite Launch Center in Sichuan province in April 2017.

The spacecraft had been dubbed by space authorities as the country's most advanced communications satellite before the Shijian 20, which was launched into space in December.

Weighing 4.6 metric tons, the satellite is expected to operate in a geostationary orbit for 15 years. It features a Ka-band broadband communications system capable of transmitting 20 gigabits of data per second, exceeding the total capacity of all the country's previous communications satellites.

It has conducted the world's first experiment on high-orbit laser communication, a technology crucial to enabling a spacecraft to send, receive and transmit a large quantity of data with ground stations.

The fastest transmission speed recorded during the experiment was 5 gigabits of data per second, which means a user could download a high-resolution movie from the spacecraft in only one second.

Wang Min, deputy head of the Institute of Telecommunication Satellite under the space technology academy, previously said China plans to establish an advanced communications satellite network by 2025 and, once it is complete, people will be able to use high-quality Wi-Fi service anywhere and anytime, including on other planes and bullet trains.