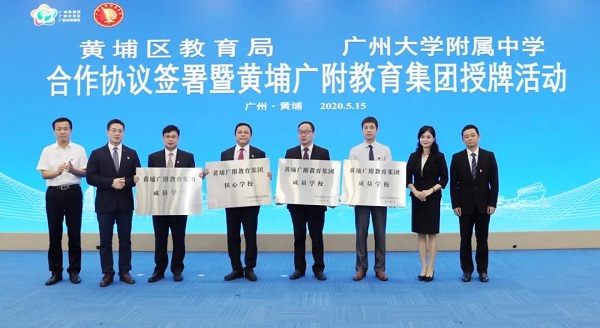 A new education group is set up in Huangpu as the Huangpu education bureau signs a cooperative agreement with the Affiliated High School of Guangzhou University on May 15. [Photo by Li Jianfeng]

The Huangpu education bureau has signed a cooperative agreement with the Affiliated High School of Guangzhou University on May 15, setting up a new education group.

As the core school of the group, the Affiliated High School of Guangzhou University will also run two schools in Huangpu district, a primary school and a high school currently named after the Huangpu Military Academy.

Huangpu will set up a special fund for national defence education to help establish a batch of high quality schools with local characteristics.

Currently, Huangpu has set up 11 education groups, involving 45 schools in the district and two companies, covering both basic education and vocational education.