Big investment continues to pour in the China-Singapore Guangzhou Knowledge City, an iconic collaboration project between the two countries, while a group of top-notch companies have also started to operate.

Located in northeastern Guangzhou in South China's Guangdong province, CSGKC was officially elevated to the status of a State-level bilateral project just one year ago in accordance with a framework agreement signed by the Chinese and Singaporean governments. The upgrade brought it closer to its ambition of becoming a world-class knowledge city.

On Oct 15, the administrative committee of CSGKC, CapitaLand - one of the Asia's largest diversified real estate groups based in Singapore - and the State-owned Knowledge City (Guangzhou) Investment Group signed a cooperative agreement to build a pilot zone for international scientific and innovation collaboration in CSGKC.

The pilot zone is expected to introduce 50 billion yuan ($7.1 billion) in the next five to 10 years to develop the industries of bio-medicine and healthcare, intelligent manufacturing, new-generation information technology, new materials and new energy, financial services, digital innovation and headquarters economy, according to the agreement.

The joint venture project will also bring the advanced experience of Singapore to the fields of intellectual property rights, education, research and development and financial innovation and accelerate the construction of smart city for a better business environment.

On Sept 27, the local government held a ceremony to collectively kick off the construction of 14 key projects of CSGKC - with an accumulative investment of about 52.3 billion yuan - to build a headquarters economic belt surrounding the Jiulong Lake at the center of CSGKC.

The projects span from commercial compounds, innovation platforms, urban renewal to infrastructure including schools and hospitals, with a focus on a 330-meter-high landmark building that will provide offices and shared space for companies, the local government said.

On the same day, a project was also announced to build CSGKC into a pilot zone for the digital economy with the most advanced network and best telecommunications services in China.

Simultaneously, the first cross-border helicopter line of Guangdong began operation, which can cut the traveling time to Hong Kong international airport to one hour and 20 minutes and that to Macao to about half an hour.

It highlights the advantageous location of CSGKC in the Guangdong-Hong Kong-Macao Greater Bay Area.

According to official figures as of mid-October, 1,605 companies had registered with CSGKC since 2010, with an aggregate registered capital of 136 billion yuan.

A total of 54 key industrial projects in 113 construction sites are under construction, with focuses on four strategic industrial value parks in the sectors of new-generation information technology, high-end equipment manufacturing, international bio-medicine and new energy, new materials and smart chips. Besides the flow-in fund, the local government also said in late September that 31 key projects with a total investment of 65.5 billion yuan in CSGKC had been completed and put into production from the beginning from 2019.

They are expected to generate an aggregate output value of 67.5 billion yuan annually, a significant contribution the CSGKC economy that will continue to rise.

Of the projects, the first phase of BeiGene Biologics' manufacturing base was completed in late September.

It will produce anti-cancer medicines developed by the Chinese leading bio-medicine company.

"It is amazing that it took just 18 months from the commencement of construction to trial production," said Liu Jian, senior vice-president of BeiGene, adding that the second and third phases will be kicked off ahead of schedule due to the expected strong demands globally.

Led by BeiGene, more than 30 bio-companies have invested roughly 20 billion yuan together in CSGKC, which is expected to generate nearly 100 billion yuan revenues annually in the near future. 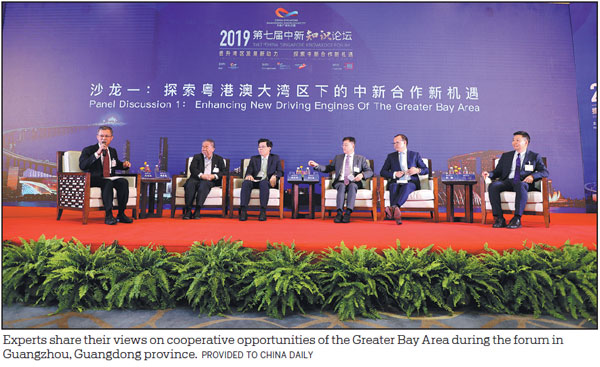