Ground-breaking ceremonies were held for a group of 14 key projects at Sino-Singapore Guangzhou Knowledge City in Guangzhou, capital of South China’s Guangdong province on Sept 27.

The projects, including a headquarters cluster and an international innovation-driven center, will be built with a total investment of 52.3 billion yuan ($7.33 billion). 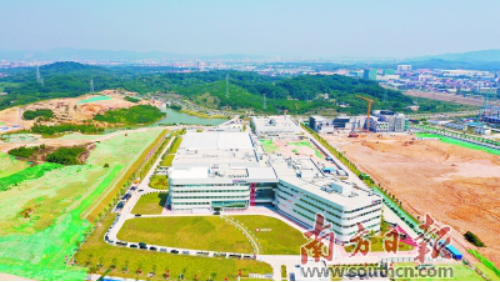 On that same day the Guangzhou-Hong Kong-Macao general air route was launched and an international digital economy hub project destined for Knowledge City was signed.

Knowledge City, which is more than 30 km away from downtown Guangzhou, was an area of fishponds and farmlands nine years ago.

Nowadays, the development of a group of industrial chains and the construction of Smart City are progressing well as Knowledge City welcomes the first anniversary of this cooperation project between China and Singapore.

A headquarters cluster will be built with an investment of 5 billion yuan in Knowledge City. Located by Jiulong Lake, it will open commercial space, offices and luxury hotels and will become a landmark facility in the area.

Xu Hui, deputy director of Knowledge City, said that the cooperation between the two countries will focus on scientific innovation, urban development, intellectual property, talent exchange and training, and investment promotion through the cluster.

"In the future, there will be helicopter airports and entry-exit ports in Huangpu district, the Guangzhou High-tech Industrial Development Zone and Guangzhou Development District, where people can fly to downtown Hong Kong and Macao by helicopter, " said Kang Junjun, chairman of the air route’s developer.

The Guangdong- Hong Kong - Macao Aviation Industry Base mainly offers charter flights, freight and other cross-border passenger services in the area, Kang said, adding that an integrated aviation industry base integrating a general aviation airport, a duty-free shopping mall, a training base and an experience center will be built.

Thanks to the helicopter air route personnel exchange and logistics development will be boosted, especially in medical treatment and biomedicine, improving the efficiency of medical tests and first aid, according to Xu Hui.

Phase I of Beigene’s production in Huangpu was completed on Sept 27. Covering an area of 100,000 square meters, the project was invested with more than 2.3 billion yuan and took only 18 months to realize a production capacity of 8,000 liters.