"Internet +" is playing an important role in solving the problem of garbage sorting supervision in Guangzhou's Huangpu district.

Since the second half of last year, Huangpu district has installed more than 230 sets of smart sorting and recycling equipment in 31 residential communities such as Whampoa Garden and Jinbi Century Garden.

Using information management methods, it has established a basic system for garbage sorting and sustainable point redemption. There is even a classification and recycling supervision system.

Up to now, more than 18,200 residents have registered, and more than 1.8 million batches of garbage have been processed.

Over 600 classified and conveying sites and 20 large-scale garbage dismantling centers have been built.

With stations in the community and centers in the towns, the garbage can be collected and transported properly and promptly. The annual average recycling of waste lamps has reached more than 100,000 pieces, other harmful garbage measures 20 tons, waste wood 6,000 tons, waste glass 3,700 tons, waste textiles 150 tons, and daily average kitchen waste 140 tons.

Huangpu district was included as one of the six advanced areas of compulsory classification for domestic waste in Guangzhou this year. More than half of its rural administrative villages (including seven demonstration villages) are required to implement garbage sorting, and 60 communities must be exemplary.

At present, a second group of 20 waste classification model communities have passed acceptance, and Whampoa Garden has become the city's first high-rise community to remove its old-fashioned rubbish bins. 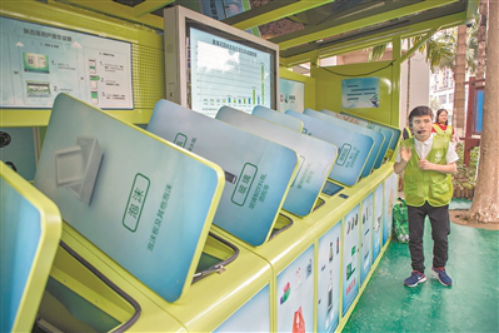 An intelligent garbage sorting and recycling machine installed in Whampoa Garden has 13 options for recycling.[Photo/Guangzhou Daily]