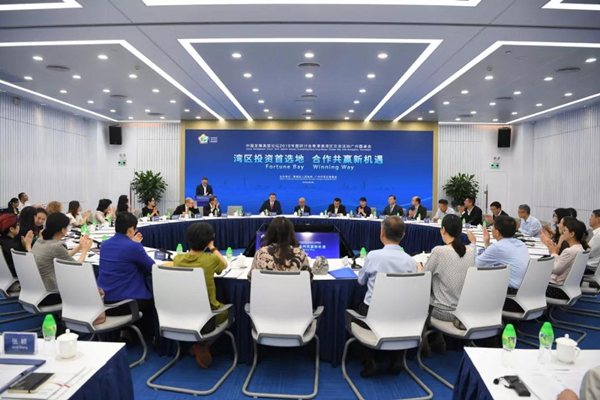 More than 40 representatives from governments, enterprises and research organizations discuss construction and investment in the GBA. [Photo provided to chinadaily.com.cn]

Merck, Germany's global pharmaceutical and high-performance materials giant, signed an agreement with the zone in November 2018. According to the agreement, the company will establish its Guangdong Innovation Center in the Guangzhou International Bio-Island.

Merck chose to settle in the GHIDZ for its good educational and medical resources, said Mo Lingdong, deputy director of the Merck Guangdong Innovation Center. He added that the high-tech zone has attracted many dynamic startups with which Merck will work to conduct R&D.

As the construction of the GBA speeds up, Merck can make use of the connection of Guangdong, Hong Kong, and Macao to bring technological achievement to the market, Mo said.

Mars Wrigley (China) Co Ltd has been operating in the high-tech zone for nearly 30 years, and in 2018 settled its headquarters there.

Hou Wenhuan, director of Corporate Affairs of the enterprise, said that the company is attracted by the fair and transparent business environment in the zone, adding that government officials in the zone take responsibilities, make breakthrough, and encourage innovation.

Mars is optimistic about the overall strategy of the GBA construction, and hopes to take root in the high-tech zone to develop more products that meet the tastes of consumers and further expand the market, Hou said.

The China Development Forum is the country's first national-level large-scale international forum after the "two sessions". It serves as an important dialogue platform for senior officials of the Chinese government, global business leaders, international organizations and Chinese and foreign scholars.