Guangzhou is upping its effort to integrate its port and city development to boost the regional economy of the Guangdong-Hong Kong-Macao Greater Bay Area, officials said at the forum for bay area ports and cities held in the Guangdong province capital.

"The construction of the Bay Area is a major national strategy and is an opportunity for the world," said Jiang Baohong, deputy director of the administrative committee of the Guangzhou Development District. 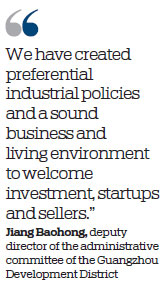 The Guangzhou Development District has taken the opportunity to develop a destination for investors through efforts such as setting up platforms specializing in science, biotechnology and ports, Jiang said.

"We have created preferential industrial policies and a sound business and living environment to welcome investment, startups and sellers."

Raymond So, under secretary for transport and housing, Hong Kong Special Administrative Region government, said that since the 1990s Hong Kong has been one of the world's largest ports.

Hong Kong is establishing an integrated system of coordinated development so as to enhance cooperation with the world amid the increasing globalization, So said.

Guangzhou and Shenzhen are major manufacturing centers in South China and have been forging ahead in the upgrading and transformation of industries, he said, adding that Hong Kong should collaborate with these cities to seek better development through leveraging the advantages of all parties.

Wan Qiuhong, deputy head at the Guangdong province branch of Bank of China, said a bay economy is an elevated form of regional economy in terms of the global economy.

A bay area is equipped with efficient resources incorporating transportation, capital and top talent. It is also home to the most developed and competitive cities in the world, Wan said. A port is part and parcel of bay area facilities and also plays a role in promoting the development of bay area cities, she said.

"The Bay Area will become a new point to link China's economic growth with the world and to promote the construction of the Belt and Road Initiative."

In February, the central government released an outline for the development of the Bay Area, calling for all-round development in fields such as infrastructure and technological innovation. The outline has brought an opportunity to Guangzhou, and the port will be further developed in fields including real estate, aquaculture and tourism to aid in improving the livelihood of the Bay Area's residents, said Shi Tingfeng, chief engineer of Guangzhou Port Group.