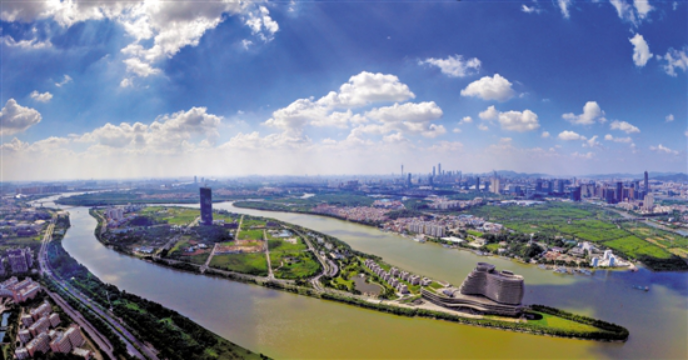 The image of Guangzhou International Bio Island has changed after 11 years of construction and eight years of operation. [Photo provided to chinadaily.com.cn]

In Guangzhou's Huangpu district and the Guangzhou Economic and Technological Development District, there is a cluster of more than 1,000 biomedical enterprises, the industrial scale of which surpasses 80 billion yuan($12 billion), accounting for about 60 percent of Guangzhou's economic depth. The distinctive Guangzhou International Bio Island has contributed to this impressive result.

After 11 years of construction and eight years of operation the Bio Island is now home to more than 170 bio-tech enterprises and the site of more than 10 billion yuan of investments in bio-tech and supporting infrastructure.

Encircled by the path known as "the most beautiful greenway in Guangzhou", the island has achieved a perfect combination of biology and technology, and successfully merged industry and the environment.

More than 170 enterprises are located on the Bio Island.

The Bio Island, developed from the formerly-known Guangzhou Island in the Guangzhou reach of the Pearl River, was approved for construction by the National Development and Reform Commission in 2000.

It started operations in 2011, with the arrival of the first batch of signed enterprises. Liang Yaoming, chairman and CEO of Guangzhou Kingmed Diagnostics Group Co Ltd. (Kingmed), visited the Bio Island for site selection of Kingmed's second venture during the period of the island's initial establishment.

"When I first came here, not many companies had settled in, and transportation was inconvenient." Despite the apparent shortcomings, Liang said he believed then the island "would make big moves in the future".

"The environment here is similar to that of foreign technological parks," said Liang, quoting a senior talent he had interviewed. The island has changed dramatically:"more than 170 biotech companies have moved in, which shows that people are optimistic about the island."

Running has become a new way of touring the island.

As early as 2011, in a public appraisal organized by the Bureau of Forestry and Landscaping of Guangzhou Municipality, the greenway of Bio Island was chosen by 600,000 netizens as "the most beautiful greenway in Guangzhou".

Since March this year, media at all levels in Guangdong have reported on the province's greenways; the Bio Island greenway has received wide-spread attention and frequent references.

"This small island in the middle of the Pearl River, which can be toured by running a circle of six kilometers, is now home to 18 academicians," said Zhou Yawei, Party chief of Huangpu district, suggesting that visitors to the Bio Island can experience the "most beautiful greenway in Guangzhou" by running. A jog around the island will introduce them to many bio-tech enterprises, maybe including some big names in the field.

Multiple platforms for international cooperation have been set up.

According to the relevant press release by Huangpu, the Bio Island has built up China-UK, China-US and China-Japan international cooperation platforms, among others.

In addition to bio-medicine, more new things have emerged on the Bio Island, continually enriching the variety of the island's businesses.

"We made a lot of 'firsts' here," Han Xu, legal representative of WeRide; they include WeRide's first remotely controlled self-driving area and its first unmanned crossing of river tunnels.

Involved in self-driving research and development, after settling down in Guangzhou WeRide also brought high-precision map R&D enterprises to the city, which are essential for self-driving, to form a full self-driving R&D chain.

"Guangzhou International Bio Island, like a shiny pearl on the Pearl River, is the CBD for bio-tech in Guangzhou," said Wen Guohui, mayor of Guangzhou.

The annual output value of Guangzhou's biomedical industry exceeds 100 billion yuan and is expected to reach 180 billion yuan by 2022.