Scan QR code and start a business right away in Huangpu

A woman surnamed Liu came to the Huangpu district government service hall at 8:40 and scanned the QR code there to register her company using the new blockchain+AI service on April 22.

She input all necessary information in about 10 minutes. At 9:10, the system told her that it was ready to print her business license.

One hour later, Liu can also enjoy home delivery of her official seal as long as she earlier chose "home delivery" among other online options.

Meanwhile, the information of the bank account she opened in advance and her application for tax invoices were all received by the departments in charge. The tax department, for example, can mail her the tax invoices for free. 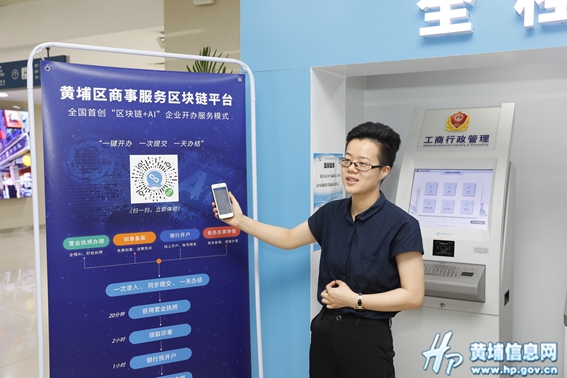 To start a business, the applicants can get things done once and for all by using WeChat mini-programs that allow them to key in information, apply for a business license and official seal, keep files on record, open a bank account and receive tax invoices at the same time.

In the past, if someone wanted to start a business, he or she would have to run between the market supervision department, seal manufacturers, a bank, the tax department and so on, or search their websites one by one. They had to fill in multiple forms and wasteda lot of time.

However,in today's Huangpu an official WeChat mini program allows entrepreneurs to deal with their license, seal, record, bank accounts and invoices at home, once and for all, in less than a day.