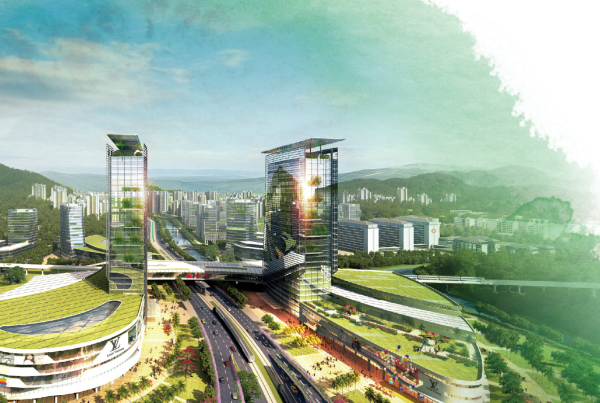 Changlingju is designed to accommodate the spill-over functions of central districts of Guangzhou, such as residences, R&D and commercial services, and will further promote city-and-industry integration and job-housing balance, and facilitate coordinated development of both Sino-Singapore Guangzhou Knowledge City and Guangzhou Science City.

As one of the six core industrial parks of the Guangzhou Development District (GDD), Changlingju is to become a green, eco-friendly and most livable community in eastern Guangzhou, as well as an aggregation area for high-end emerging industries.

Six development strategies have been highlighted in the design process:

Green transportation that promotes the TOD-type of efficient land use;

A landscape featuring a new Lingnan architectural style; and

Utilization of ten green municipal engineering technologies for a green and smart community;

The spatial structure of Changlingju is best described as one axis, one core, four centers and four zones.

One axis: the functional development axis of Changling Road

One core: the Changling headquarters R&D and commercial core

Headquarters R&D for high-end and emerging industries: To build office areas for corporate headquarters along key transport nodes of the rail transportation network

Health care industry: To foster the development of the health industry, medical care, rehabilitation and the real estate industry for elder-care purposes

Ecological recreation: To develop the ecological tourism industry by making full use of mountains, forest parks, reservoirs and other available natural resources.